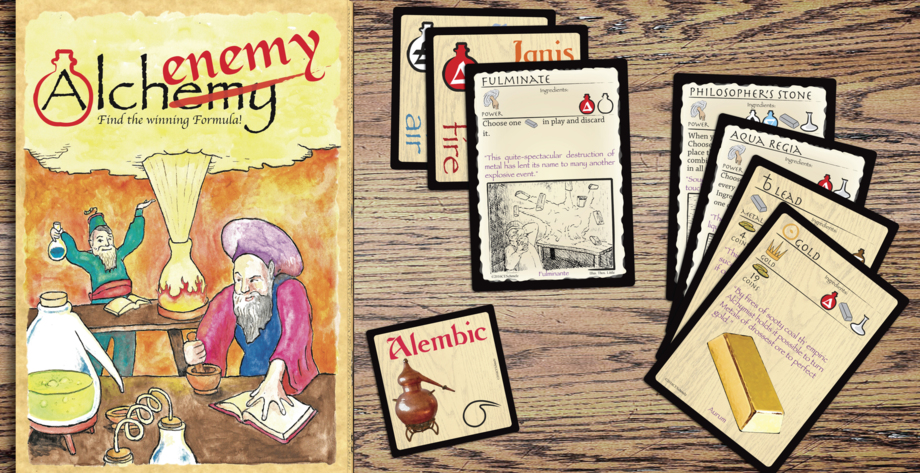 How did this come about, you ask? How and why did a seemingly sane person embark upon such an effort? Allow me...

One day, while I was playing Magic: the Gathering, I  got a paper cut from a radioactive card. After week of fever my superpowers manifested themselves…

Well, not really, but discovering M:tG did changed my perception of what constituted a card game, and I continued to appreciate the intricate mechanics, the otherworldly story, and the incredible art over many years of play. Its complexity and huge selection of cards, however, made it difficult to play on an occasional, casual basis, especially with less experienced gamers. Non-collectible deck-building games had a similar issue - their set-up time was frequently a drawback. Alchenemy was born of my desire for a card game that balanced the strategy of M:tG with the ease of set up and quick play of “draw, go” games.

The strategy came from two ideas had been kicking around in my head after many years of playing games: having to choose between drawing from a limitless deck of basic resources or a limited, personal deck of cards, and having to choose between saving cards towards winning, or spending them to affect your opponents’ play. The medieval theme came to me quite quickly: I wanted the game to have a fantastic setting and magical feel, like M:tG, and alchemy was an apt choice. The limitless, common cards mapped easily to the classical elements Air, Earth, Fire, and Water, while the personal decks of powerful cards suggested books of alchemical formulas. Finally, the financial opportunism engendered by the quest to turn lead into gold made the win condition obvious – it's all about the money.

Spreadsheeting skills and statistical models helped me dial in card quantities and values, limiting the possibility a bad draw would ruin the game. Excessively disruptive cards were identified and removed so no single strategy would be a clear winner.  Refined through extensive play testing, the rules became as simple as they could be but no simpler as many beloved, but secondary, cards, themes, and mechanisms were eliminated.

Layout, language, and iconography also evolved to make the cards easier to quickly read and comprehend. I vividly recall an "Aha!" moment at the 2016 Protospiel in San Jose. A young man at my table told me flat out, "The cards are all wrong". He was right-handed, I am left, and I had unconsciously designed all the cards so the information was best viewed when fanning the cards to the left. That issue was duly corrected in the next printing.

One change, in the timing of the draw, had a surprisingly large impact. Originally, players drew at the beginning of their turn, but that made everyone else wait while they read the cards and plotted. Changing the draw to the end of a player’s turn, so all the thinking happens while someone else plays, kept everyone busy and shaved 30% off the length of the game.

Testing and design have now reached their likely apex, and I am seeking funding for the first print run. This is my first game, and as such is unlikely to wind up in retail outlets, so I encourage you to swing by the KickStarter campaign and contribute so you can point to your copy and say "I played the game before the designer was famous".